With Delaney being the  honored hero for this year’s Leukemia and Lymphoma’s Light the Night Campaign, we were asked to speak at an event today.    It wasn’t just any event though, it was a recruiting event at a company called Terumo BCT who has raised over $100,000 a year for LLS for each of the past two years.  The company actually makes medical supplies including the bags that hold blood and protect it from contamination. Most importantly,  they do their jobs with the patient who might be using their product in mind.  So much so, that all the employees had a picture of two cancer survivors on their employee badges.  Talk about a company living its mission!
We did our speech (with Delaney being the star) and then met a lot of really nice people.  Delaney was having a blast especially because one of those nice folks let her fire up this sweet motorcycle: 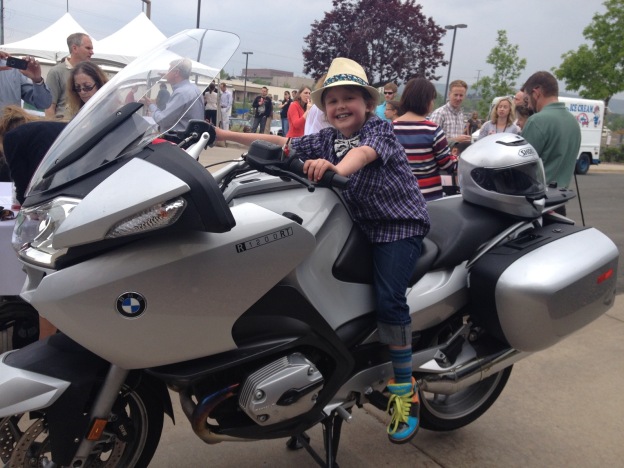 So if you are a seven year old girl and almost accidentally get to perform your best Evel Kneivel impression on a crowd of unsuspecting fundraisers,  how does your day get any better than that?  Well… a couple of angels from Make A Wish could show up with a giant cookie cake and balloons 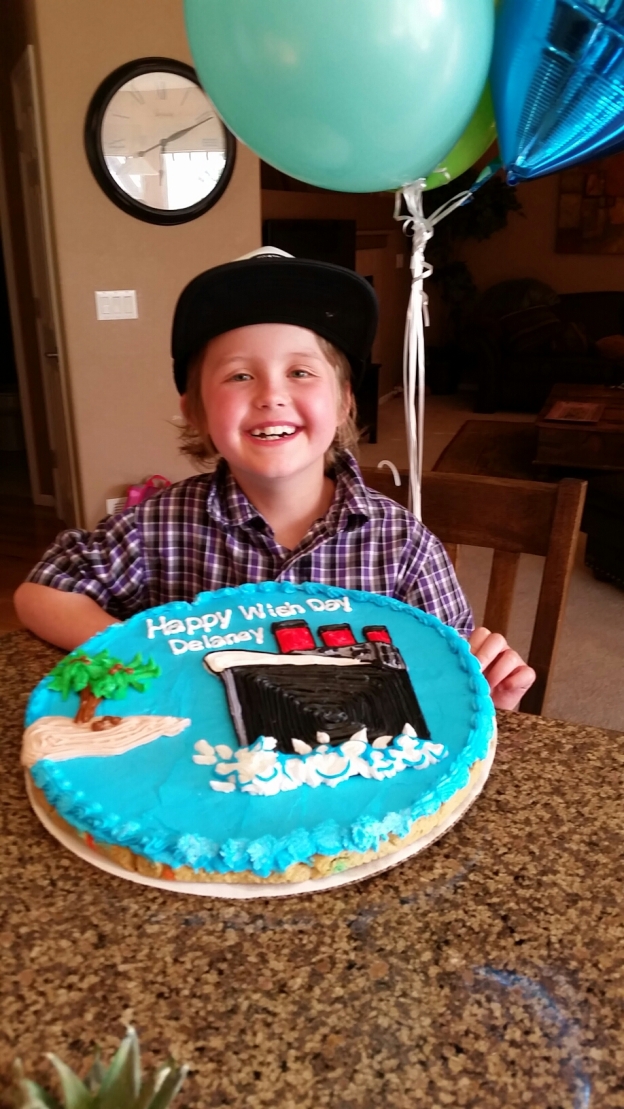 And then they could give you a Mickey Mouse bowtie 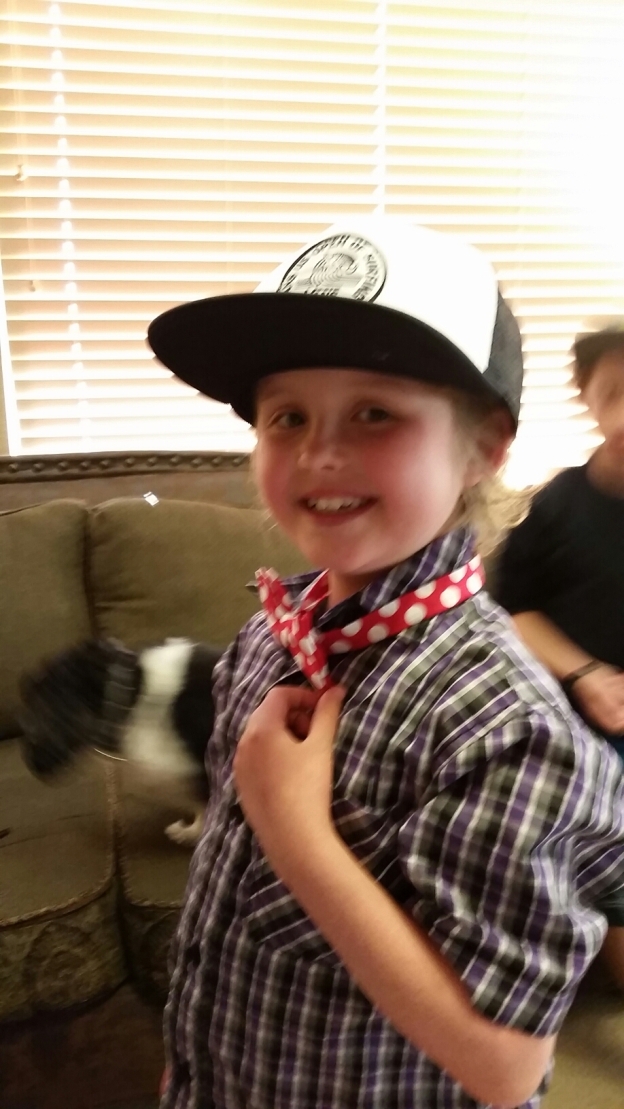 And a really cool top hat 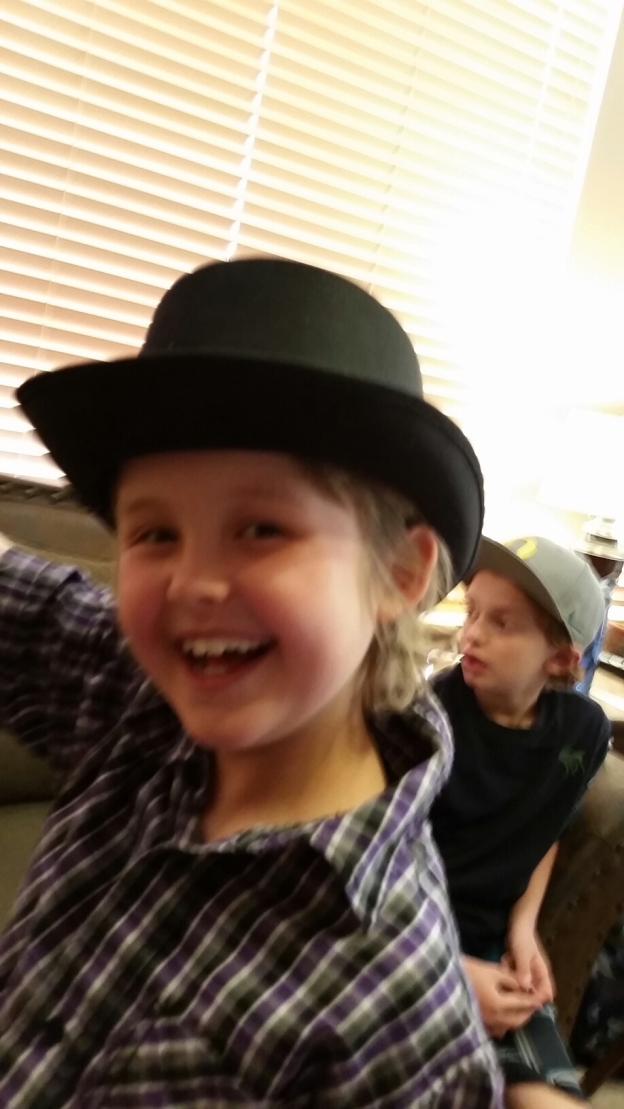 That you’ll need to wear with your NEW TUXEDO 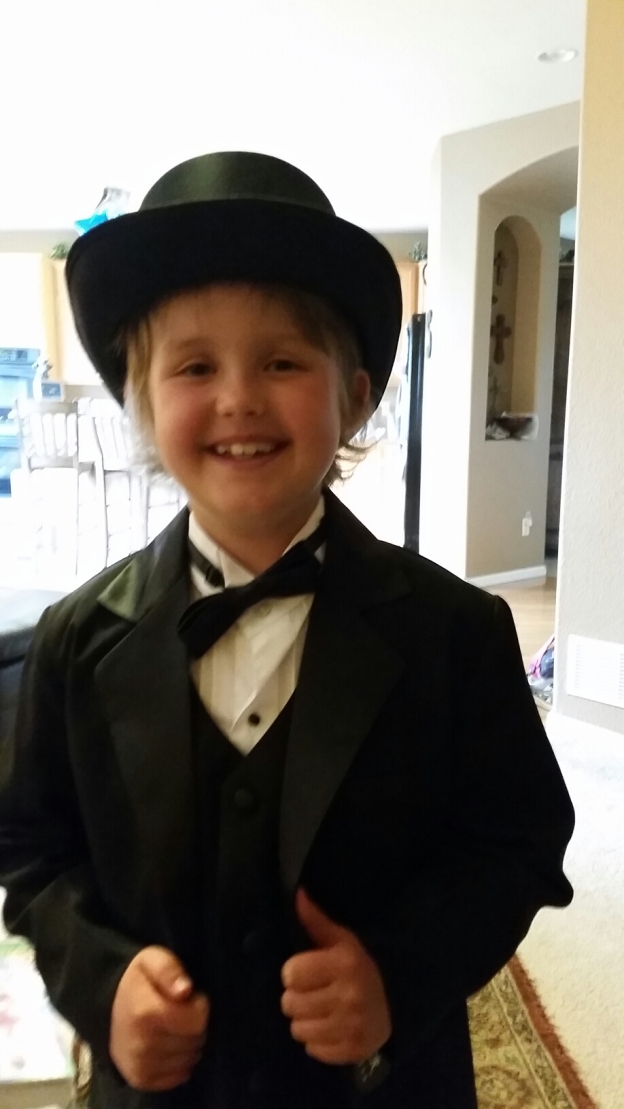 When you get to go on your Disney Cruise thanks to so many people who donate so generously to Make A Wish.

Thank you all for bringing a smile to this little silly goofball’s face (okay…these three goofballs’ faces)! 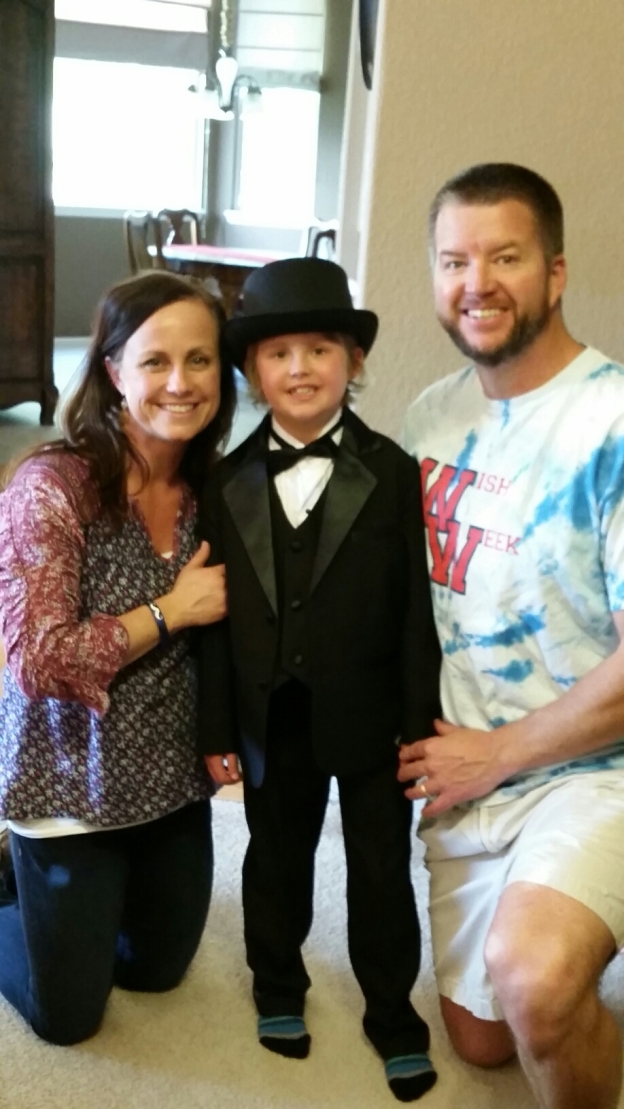 Delaney has been quite the rockstar the past couple of weeks. Well… a star anyway. She got to be the student of the week for her classroom. She got to make a poster about her family, favorite things, and what super power she would want to have (I’ll tell you so you can get some sleep tonight: shapeshifting). My wife and I love how whenever she gets these opportunities to talk about herself, she’ll tell people about her three sisters, her dog, and even her two guinea pigs, but never about cancer or being sick. As part of the Student of the Week fun all of her classmates wrote notes to her and the teacher put them in a little book for her.</ 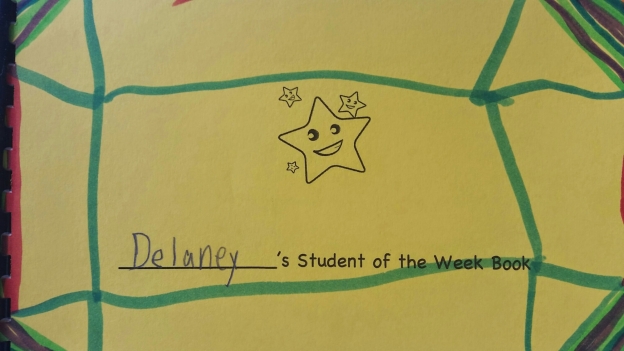 Here is a sampling:

You are a great frend.

You are sweep to peple and I love your posetr.

You are Kool and I tenk you aer spesrol.

(this one had the star colored in and the words “smell this”—what are these little hoodlums into anyway???)

You are a very good friend. You are very nice. Your poster and book, casts, and Trindan Halliday gloves were very cool! Your awesome Delaney! (with a pic of a cow saying “moo”).</
I like this one too with 5 cows added and the words, “Cows for joy!” 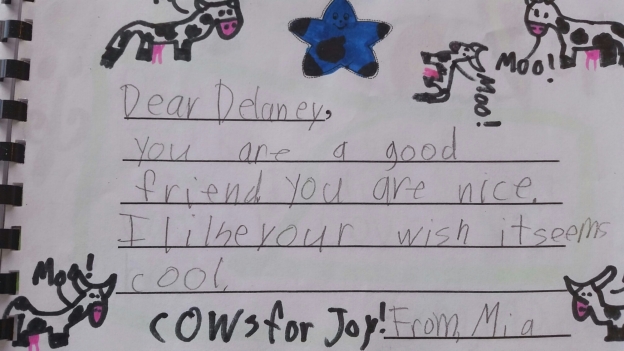 There were actually lots of cows and lots of love from these little first graders.

Speaking of cool kids, one of Delaney’s very best friends came to Friday’s chemo appointment. They were so excited as her little buddy Sawyer got to experience it with her. They weighed Delaney then weighed Sawyer. Measured Delaney then measured Sawyer. Gave Delaney chemo, then gave Sawyer chemo. Okay not really, but you get the idea. As I watched the two of them laughing and goofing and having so much fun at her appointment to get chemotherapy, it made me realize that life is what you make it. Why NOT have fun? As my buddy Willy Shakespeare says all the time, “There is nothing good or bad but thinking makes it so.” Once again Delaney is helping me learn the valuable lesson of perspective. Cows for joy!!!
Here is a pic of the little goofballs: 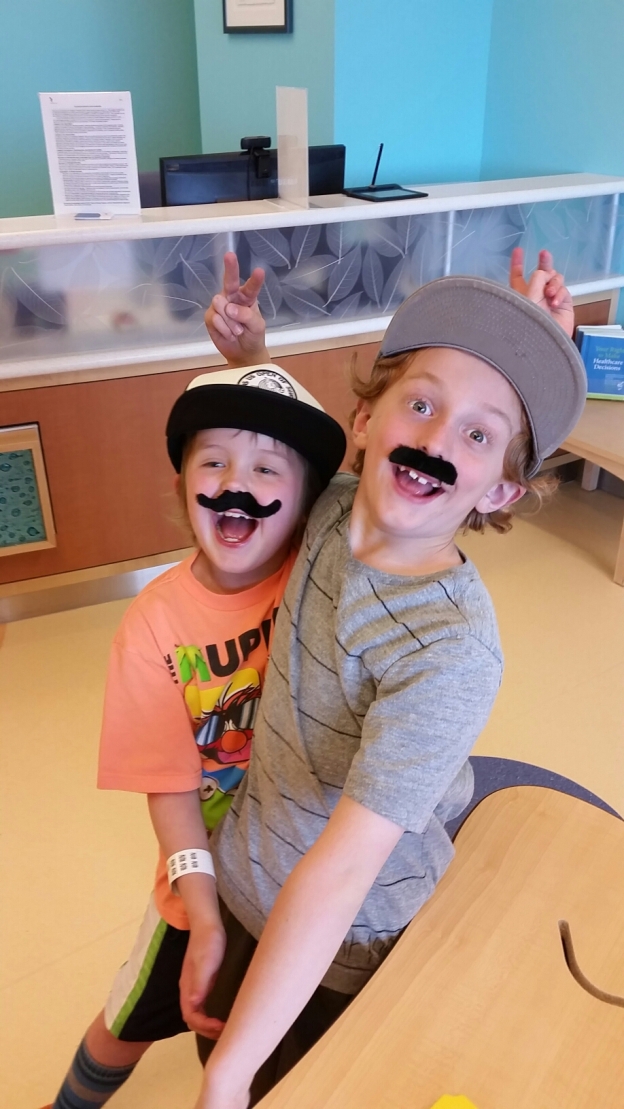 Have you ever had one of those weeks?  You know the ones where your job could be going better, your relationships could be stronger, and you’re angry at God and just about everyone else because you’re just down in the dumps?  Well, I was having one of those weeks a couple of weeks ago.  By the time Friday evening rolled around, I just wanted to put on some cozy PJ’s, curl up in a the fetal position, and cry for my Mommy.  Okay, not really, but as work was piling up and I was already exhausted, I wasn’t really looking forward to the Spring Carnival at our kids’ school.  The only reason that I was going was because Delaney was beyond excited to go and the only way my week could get any worse was if I let my daughter down in something that she was really looking forward to.

As we entered the Spring Carnival, I couldn’t but notice all the usual fun stuff: bounce houses, dunk tank, games, girl dressed as a cookie holding a sign that has my daughter’s name and pictures of mustaches on it.  Wait… what was that?  The elementary school had already blessed us last year with the stache station.  Maybe there was a mistake?  A couple of steps later I realized that it wasn’t a mistake as there was the culprit: there stood young Jackson (aka The. Sweetest Kid. EVER.), “Hi Mr. Stafford!”  He was selling cookies and donating all proceeds to help support Delaney.  Really it was more than just Jackson as there were probably about five different kids and just as many adults.  What I found out was that Jackson took it upon himself to approach the PTO of the elementary school he no longer attends and ask their permission.  Not only did they give him permission, they rallied behind the idea and about 5-6 different families joined Jackson’s family in baking cookies to be sold.  Somehow this was all kept a surprise from us until the carnival… maybe things really weren’t that bad afterall.

Not even 24 hours later, I got a message on Delaney’s Facebook page from a woman that I don’t know if I have ever even met.  Her daughter and friend wanted to do something for Delaney.  They went and bought all the supplies for a lemonade stand and set it up all on their own, and then spent almost the entire day selling lemonade.  These sweet kids just took it upon themselves to do whatever they could to help.  How awesome is that???  Keep in mind that it has been over a year since Delaney was diagnosed.  With video games these days are today’s kids supposed to have attention spans that last a few seconds (who am I kidding… Squirrel!)? Young Jackson, his sister Lauren, Maizie, and Ally are restoring my faith in humanity.

As for Delaney, she is doing great!  She is still getting her monthly infusion of blood products and it seems to be working for her.  We actually had a rarity last week where two of her sisters were home sick with a cold and “sick” Delaney was feeling so well that she couldn’t wait to get to school.  Assuming her counts are good on Thursday, she’ll be getting more chemo in her port this Friday.

Lastly,  we found out that Delaney was chosen as the Honored Hero for the Denver area Light the Night Campaign for the Leukemia and Lymphoma Society.  If you have never heard or done one of these, they are a ton of fun.  Come join us on October 2nd as we walk around Wash Park in an almost festival type setting with everyone getting a light to carry around with them to symbolize the hope of putting an end to leukemia and lymphoma.    If you want to donate to the Leukemia and Lymphoma Society or want more information on the event, please see the link below: