I guess it was time. As much as Delaney was proving the old adage of, “Bald is beautiful,” with the school year quickly approaching we thought we should consider getting her a wig. So yesterday, my wife Stacey and Delaney set off to find the perfect wig. As it turned out, they also found more than their share of laughs.
Our little tomboy Delaney entered the store and almost immediately found this boy wig:

Mom told her that she would look like a boy, to which she replied, “I know!” Mom wasn’t about to let that happen. They headed over to the girl section and after trying this one on, Stacey was thinking it should have been named the old lady section: 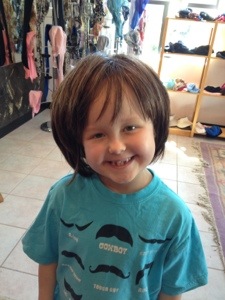 Stacey kept looking. About a minute later she heard a giggling Delaney say, “Look I am Justin Beaver!” Stacey was cracking up so much that she was barely able to convince Delaney to take this photo (my personal favorite):

They got back to the serious business of finding a girly wig, and from these pics you can tell Delaney was falling more and more in love with them:

Luckily, before Delaney decided to chuck the whole thing and just follow her dad’s lead of walking around in a Chewbaca “costume” all day, her sister Ashley came to the rescue. She noticed that there were some wigs that were made to wear with hats, which led to this winner, winner, chicken dinner:

The wig shop owner trimmed it a little bit and they were all set!
With that out of the way, it leaves me to worry about two things: Delaney and other kids. Delaney is a rule follower. If the rules say, “No hats inside,” Delaney removes her hat inside. So as her hair thinned at the end of the school year, I noticed that when we entered the school building, she would take off her hat. I let her know that she could keep her hat on, but she replied, “No, you can only wear it during recess.” I started to explain that SHE could wear her hat in the classroom, but realized that if she was okay with it, I was okay with it. My fear is that if she does the same thing this year, the other kids will make fun of her (she looks like a smaller, cuter version of Friar Tuck when she is wearing the wig without a hat). Which brings me to my other concern: other kids.
There are a lot of great things about where we live, including the free Concert in the Park series. The adults usually listen to some good tunes while the kids play in the field alongside the concert venue. We made one concert this year and at the end of the show went to find our kids. I watched as Delaney and her friends were kind of lined up facing a group of older kids that were standing about two feet away. My buddy who was watching the kids commented that he couldn’t tell if the older kids were bugging the young ones (including his son). The older kids left, we grabbed our kids, and headed home.
Whatever the older kids said or did didn’t seem to bother Delaney, but I was curious so I asked what they were saying to her. “Oh they kept telling me to take my hat off so they could see if I was a boy or a girl,” she informed me. I was immediately both angry at the kids and sad for Delaney.
Do I have any guarantees something like this wont happen again?Nope. Or what is probably more likely, is that she will lose her hat while playing at recess or in a soccer game. We’re going to just do our best to prepare her for these things, and knowing Delaney when they do happen, she’ll probably just shrug and smile. We also realize that actually worrying about these things would be a complete waste of energy. One of the lessons that we have learned through this whole (non) adventure is that 99.97% of people of all ages are kind and genuinely care about others. The other big lesson we have learned and re-learned is that God is in control. However, with that being said, if Delaney does lose her hat due to the actions of one of the .03% mean kids, I am not making any promises that I won’t break the 11th commandment: Thou shalt not spank kids that do not belong to you.

4 thoughts on “A wig shopping we will go!”