Like many things in our house, it all started with some excited giggling. It was Christmas morning and leukemia was still just one of  many things that would get us to throw a few bucks in the jar to “help find a cure.” “Dad, open this one, open this one!” Delaney repeated. Inside the next four wrapped boxes, were clues tucked into athletic apparel. That first one, in a very Nostradamus way, said, “plan on spending a lot more time with your trainer!” I knew my trainer was Delaney, but there was no way my wife could have known how true that little prediction was going to become.
The last present was a framed entry to the Tough Mudder. If you aren’t familiar with it, the Tough Mudder is a 10-12 mile challenge with 20 obstacles designed by a member of the British Special Forces. If you finish the event you get the highly coveted orange headband and the even more highly coveted: cold beer. The obstacles have fun names like “electroshock therapy” (where you run through live electric wires and get shocked by 10,000 volts of electricity) and “arctic enema” (where you jump into a pool of 34 degree ice water then swim under a plank and hope that you are still technically a man when you exit the freezing waters). They bill it as “Probably the toughest event on the planet” (note to my Ironman friends: no need to worry or threaten libel lawsuits, the Ironman was tougher).  Anyway, signing me up for it  was my wife’s subtle way of saying, “Yo porky, it looks like your 4th chin is about to have a baby so I signed you up for an event where they make you sign a death waiver before they allow you to compete in it! By the way, please sign this increased life insurance policy.”
So when Delaney was diagnosed with leukemia two months later, the Tough Mudder, like everything else in our lives, was no longer even close to a priority. As the months and treatment progressed and we settled into our “new normal,” we realized that the Tough Mudder actually fell at a “good” time in her treatment schedule. We weren’t really concerned about the race as much as letting Delaney have a fun vacation while she was still feeling well. Friday was her last chemo treatment for two weeks so this was as good a time as any to get away.
So with the Tough Mudder being on like Donkey Kong, I let Delaney and her sister Ashley shave my hair into a Mohawk and we headed up to the mountains. My freshly bald head made the perfect canvas for my 12 year old to paint an orange leukemia ribbon on the back of my noggin. The event itself was a lot of fun and I even got to cross the finish line with Delaney on my shoulders. It would seem that was only a close second as her favorite part of the event…  right behind seeing her dad get shocked.
As for the weekend itself, we were able to get away from our house, but not able to escape the ever-present cancer. Both nights, our dinner was cut short right at about the time the food arrived because Delaney wasn’t feeling well. Sunday morning we could tell she just wasn’t her normal self, so we took her temperature (just another reality of cancer is we won’t be leaving the home for any length of time without the thermometer and her anti-nausea medicine). Sure enough, she had a 101.5 fever. In the non-cancer world, 101.5 is nothing to get too worked up about. However, the “cancer book” says anything over 100.5 requires a trip to the hospital because things could get bad real fast because of their inability to fight infection. This was confirmed when we called her doctor yesterday who said, “you’re lucky you got me, because anyone else would tell you to rush to the ER right now!” Considering that the traffic was moving along at 8 miles an hour, we weren’t about to rush anywhere!
So we got to spend the morning today (and tomorrow) back at the doctor’s office where they gave her 30 minutes of antibiotic in her port. She has already been up to 100.9 degrees tonight so I am not 100% sure it is working. The challenge with our little Mudder is that she is SO tough. She’ll be sitting there just being silly and we’ll happen to take her temperature “just to be safe” only to discover she is already in the danger zone. Usually there is no whining, no crying, just a happy little Delaney that happens to not being feeling well. Which is one of the reasons that after I completed the Tough Mudder I posted a pic of the two of us on her http://www.facebook.com/CancerCanKissMyStache page. The caption read something along the lines of: One of us just ran up and down ski runs at 11,000 feet for eleven miles while getting shocked, climbing under barbed wire, swimming in 34 degree water, etc. The other one is the real stud. 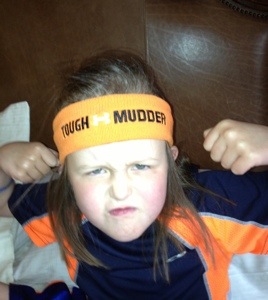 One thought on “She’s one Tough Mudder!”