What a difference 24 hours makes. Almost exactly 24 hours ago, Delaney was just nailing the impression of Linda Blair in The Exorcist. Our normally very sweet little girl was screaming at the top of her lungs, “IT HURTS!!!! AND THEY AREN’T DOING ANYTHING!!!” I am happy to say, our sweet little Delaney is back.
It was an interesting day. Somewhere around noon we were informed that we could give up any hope of leaving the hospital today. They were pumping her full of antibiotics, but instead of her labs improving, they were getting worse. Around 2’ish her pulse and respirations started racing up. The docs came in… And had no idea why any of it was happening. The top doc ordered an X-ray and then later added a CT scan.
Let me break away from my play by play for a second. I am learning a lot about this stupid cancer. Things like, just because labs are good one day, doesn’t mean they will be good the next. When you think about it, this really could be a life lesson for ALL of us! None of us know what the next day or even moment will bring. So Don’t wait… Go get your carpet diemed… Or shagged… Or whatever, but do it today. The other thing I am realizing is that there are just some things that I am going to have to get used to. However, there are other things that I have no interest in accepting as “normal”. All you parents can relate, but nobody wants to stand by helplessly while their child is in so much pain they are screaming. That was me again today when they were getting her ready for the CT scan. They force some sort of liquids (dye?) into her during the actual scan. That part didn’t bug her. When they put whatever it was that was going to allow them to get the liquids into her, THAT was very painful and had me attempting to put on a strong face for her, but it was very tough.
Anyway, long story short, the CT scan didn’t reveal anything so we are basically back to square one where they really don’t know what is going on. However, Stacey gave her a bath tonight and it did wonders for her. Her fever went away (oh yeah… I forgot to mention she spiked a fever of above 100 something), her color came back, and she started to be her usual self again. At 8pm, she was even given the update that she could eat again (talk about your cruel jokes: give a kid a bunch of steroids to make them famished, but then tell them that they can’t eat anything).
I was going to end this post with a pic of Delaney getting her CT scan. However, I came across this pic from last year that does a much better job of letting you get to know Delaney (as a person and not just her cancer). I figured since I shared one of the worst parenting moments, it was only fair that I got to share one of the best ones too. Probably one of my favorite things in the entire world Pre-cancer was coming home at night. Delaney and Ashley usually had a brief disagreement that went like this, “no, me first, me first!” They would argue about who literally got to run into my arms first. When it was Delaney’s turn we always pretended we were on her favorite team, the Denver Broncos. Then Delaney would assume the Pre-hike stance, and from about 25 feet away, I would loudly announce, “BLUE 42… SET… HUT HUT!!!” Then, as fast as her little legs would carry her, she would sprint to me where I would lift her up high into the sky and we would both just laugh with joy. Those are memories I will cherish forever. 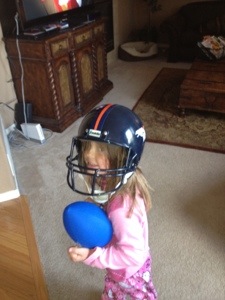